About 12% of the  earth’s crust is Silica and a further 45% contains Silica in the form of Silicates. It is very simple compound, consisting of Silicon and 2 oxygen atoms, but the diversity , beauty, physical and chemical properties defy this simplicity and there is a variety of polymorphs which (with a few other elements produce rocks of intense beauty and amazing interest). In these pages these varieties and properties will be seen. As the magma cooled the components of the granite (quartz, feldspars, plagioclase)  crystallized  out. Uplift brought it to the surface. Over time the less stable elements are dissolved and eroded.  The quartz is the most chemically stable and consequently the majority of the “left over” particles are quartz. 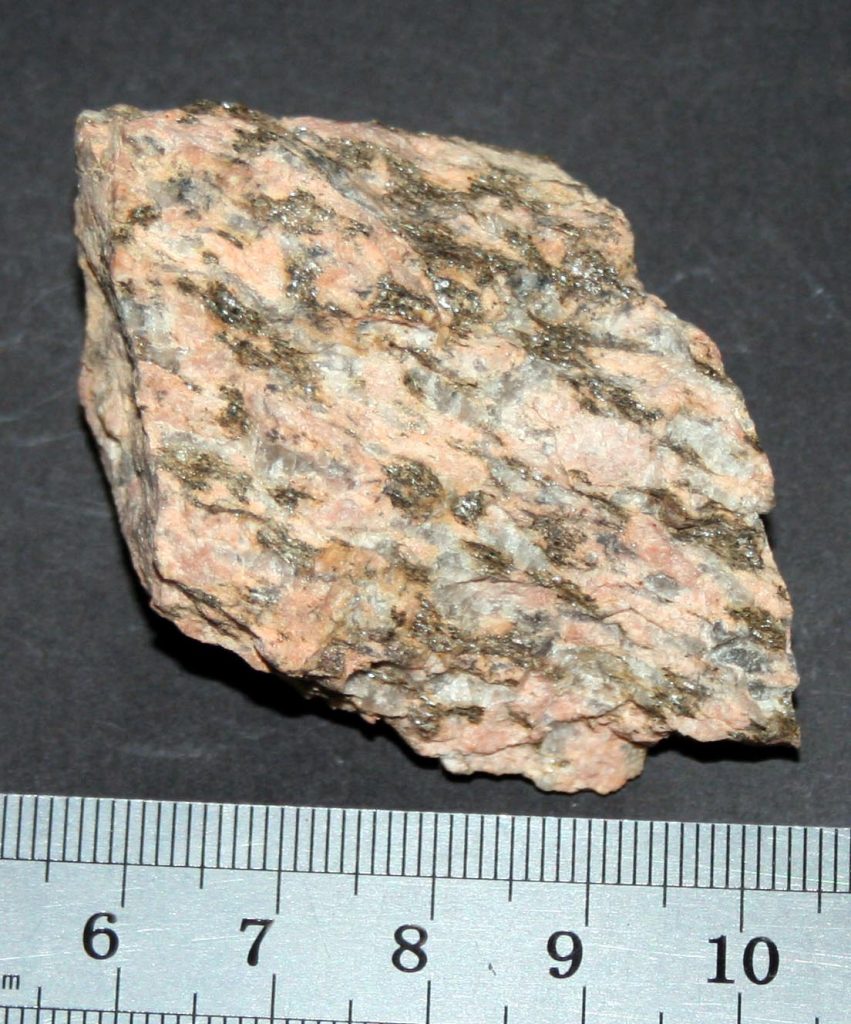 This is a small piece of granite which was formed deep inside the earth’s crust. Within the crystals of plagioclase feldspars, micas opaque crystals of quartz (blue arrows can be seen. As wind rain, ice, physical forces and vegetation break down the granite to particles that are washed away down to the sea in rivers, the quartz, being the hardest and less chemically reactive tends to remain. These particles (sand, clays and silts) are swept down by wind and water eventually settling down into sediment beds. 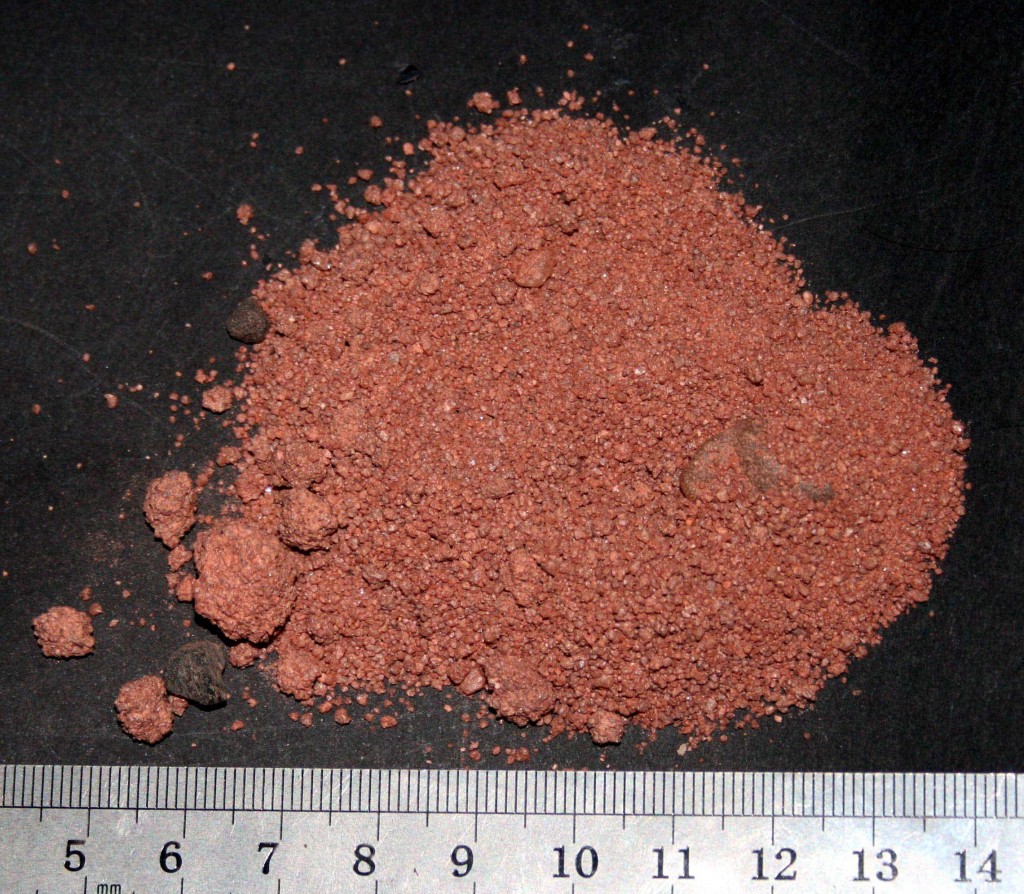 Remnants of granite Eilat can be seen as fairly large grained sand.

Gradually, in the presence of water the particles begin to dissolve and stick to each other. This occurs by salts and mineral coming out of solution around the grains “cement”.

In this specimen the sand is stuck together but easily crumbled by hand. 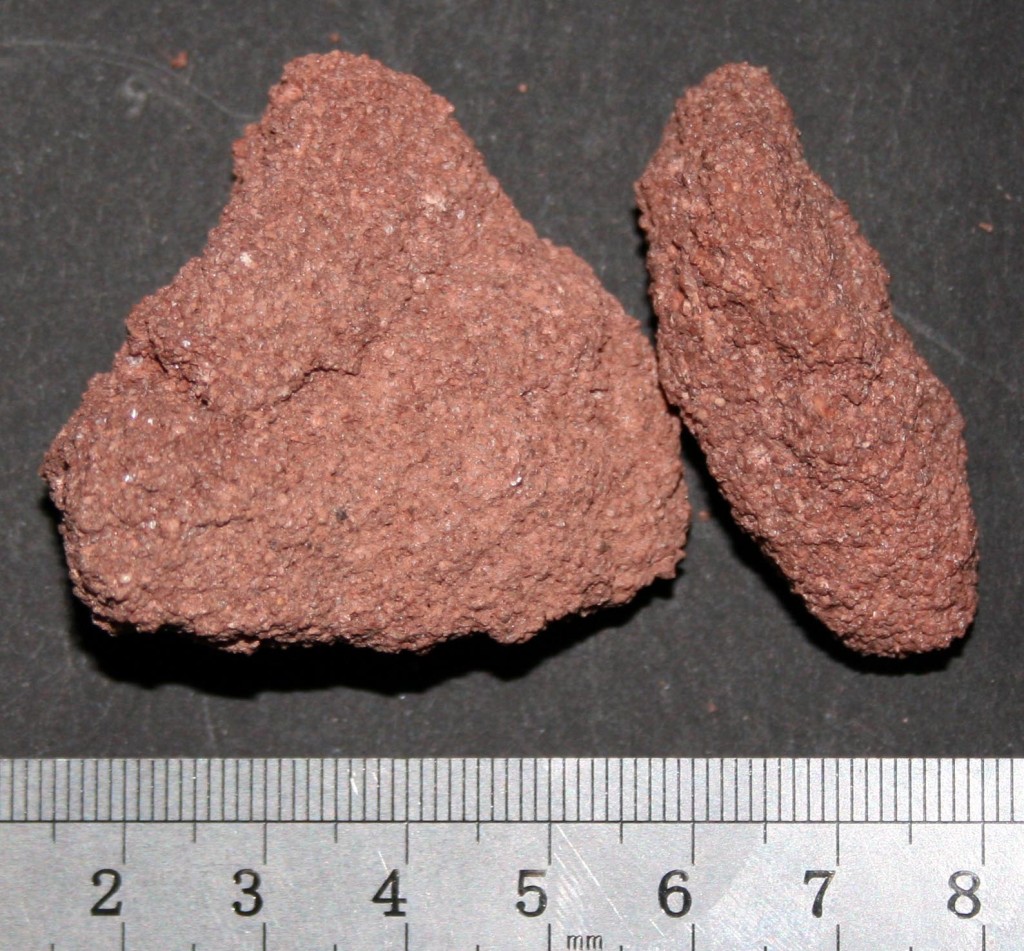 Sometimes sand is lain down in layers. This happens particularly if the eroded particles are transported by sudden flood waters. Here the results of flood after flood can be seen in the different colored layers.

If you look really closely at picture 5 you can just make out that the sandstone is made up of small grains, but in this picture (x20) these grains, cemented together can easily be seen. 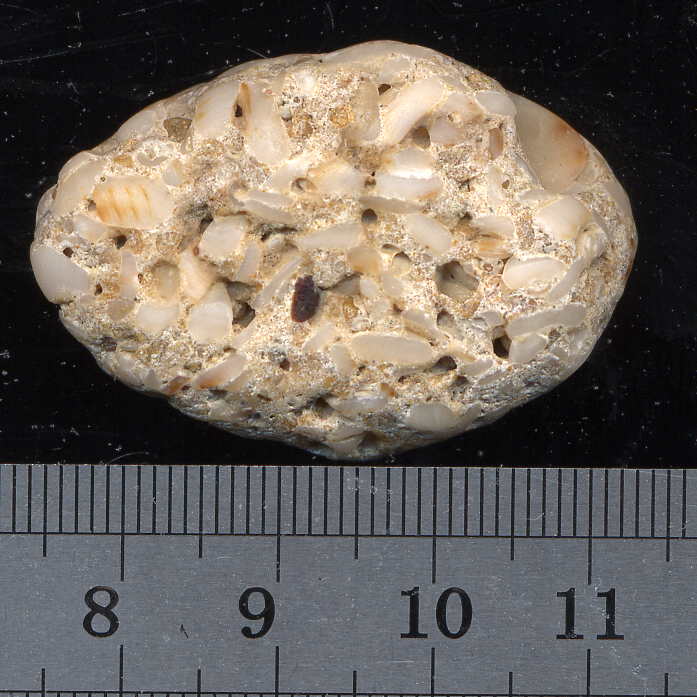 A small pebble of large grained sandstone with a lot of interstitial cement.

The further the sand has travelled and the stronger, more turbulent the river currents are the small and more rounded the sand grains as they pounded and ground down by the forces in the river. Thus the origin of this sandstone must have been very near the sea (from Caesarea, Mediterranean coast, Israel). The process of cementation and compaction can produce sandstones that are as “hard as rock” and these stones can be used in building massive structures as they are so strong, such as the magnificent temples and fort of India. 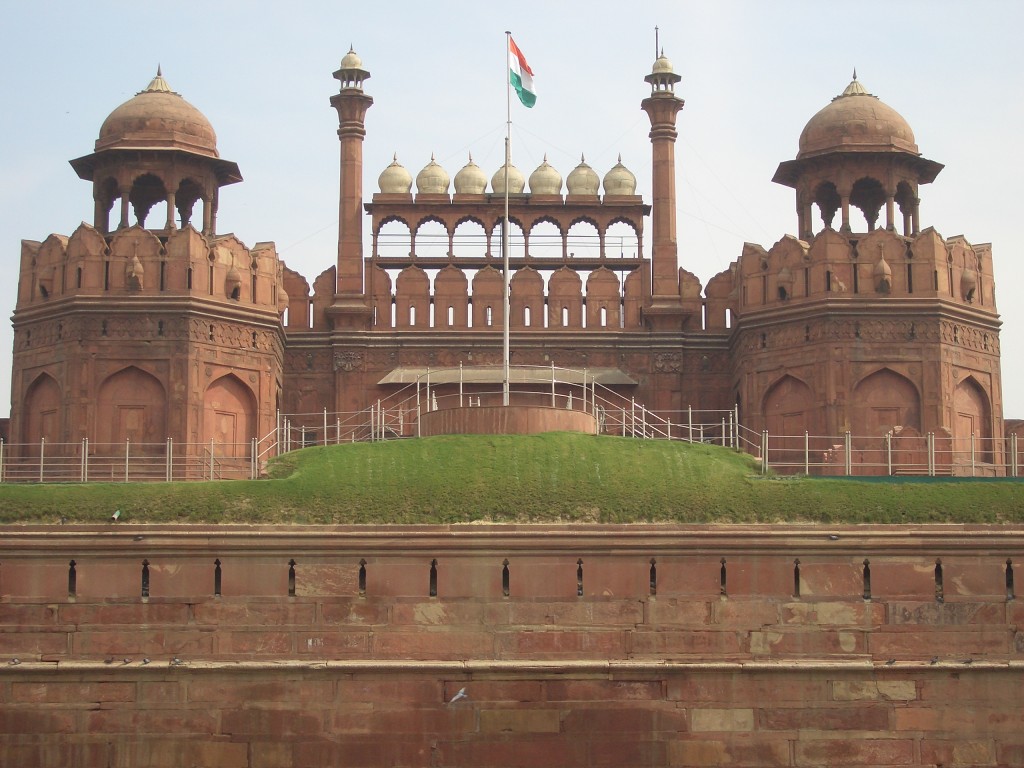 Silica is slightly soluble and as the grains of quartz lie in their watery beds the surface molecules go in and out of solution and thus the grains can bond or merge together. This gives some beautiful stones. 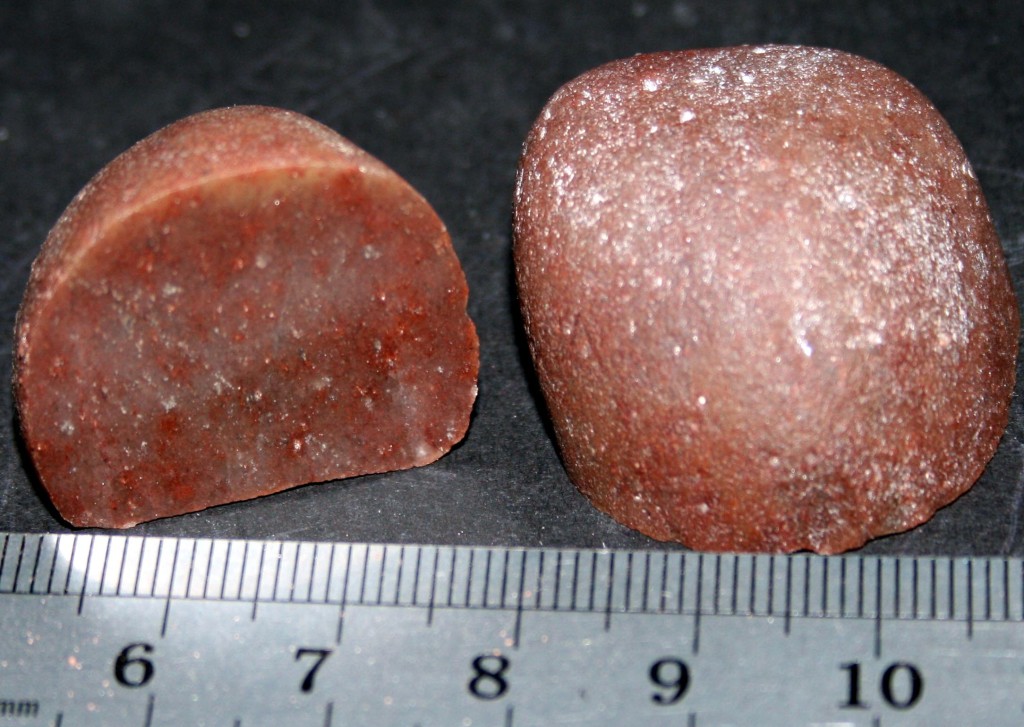 These two were found near King Solomon’s pillows near  the old copper mine by Eilat. Although this is one of the driest part of the Israel, presumably at one time there ran a river. 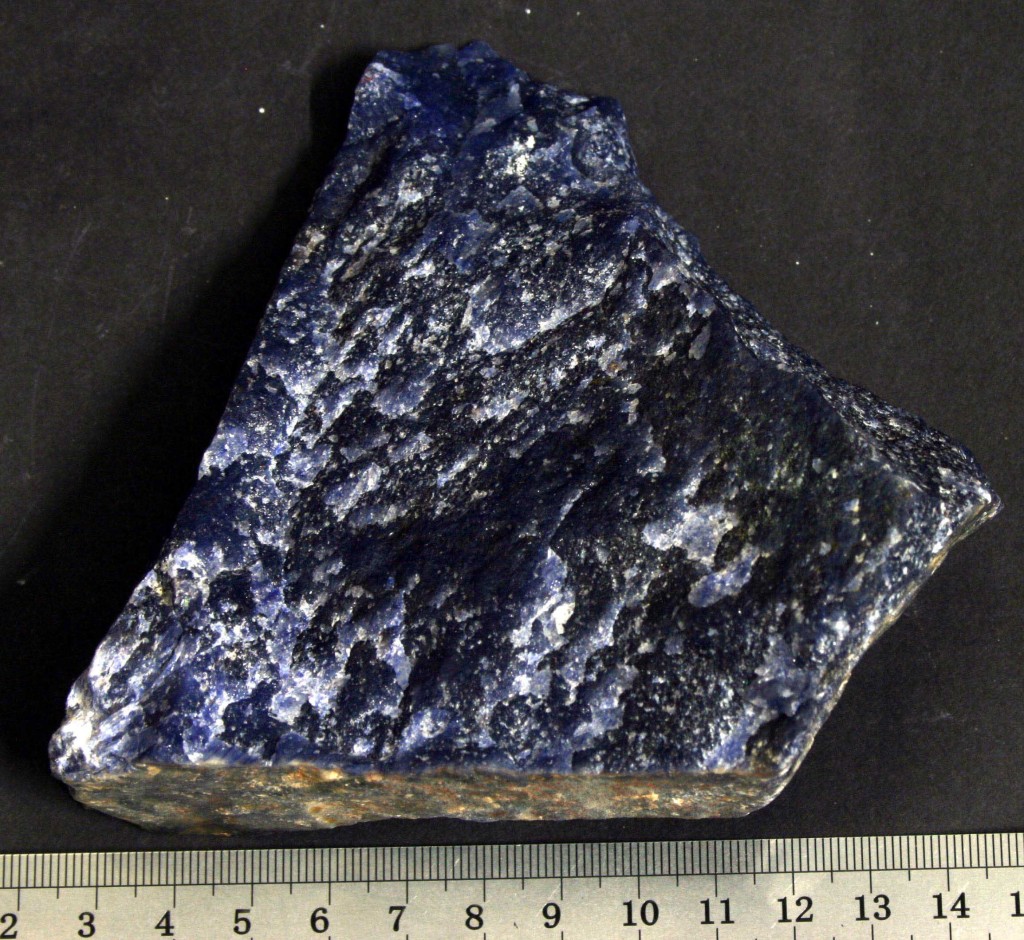 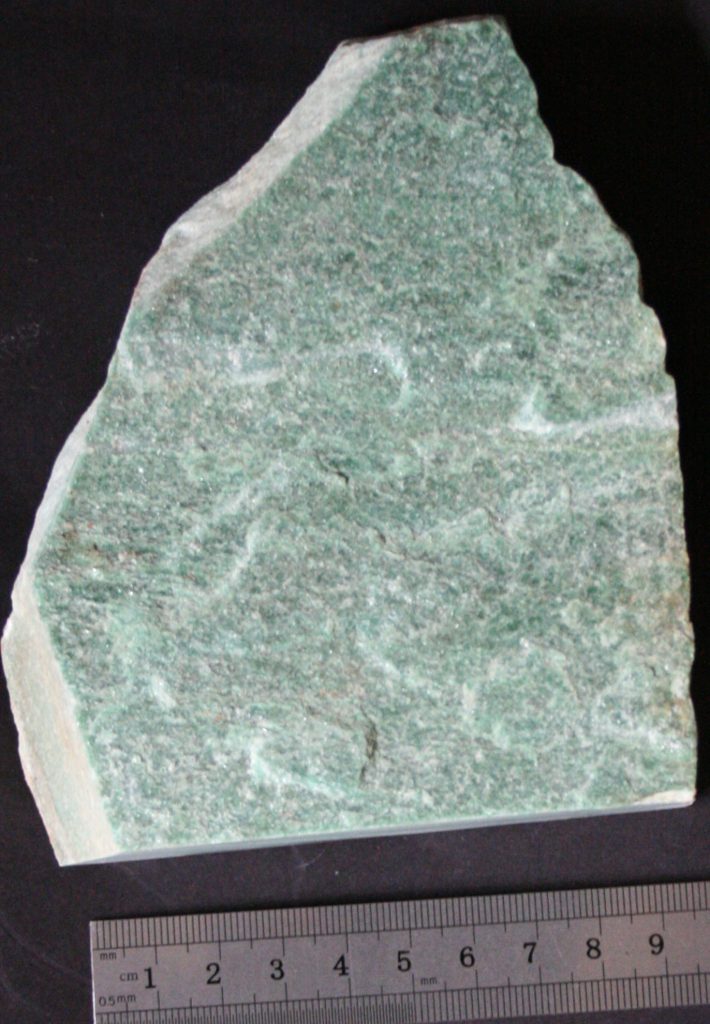 Green quartzite – The colours of quartzite can be blue, white, green and peach depending on the “impurities” present. 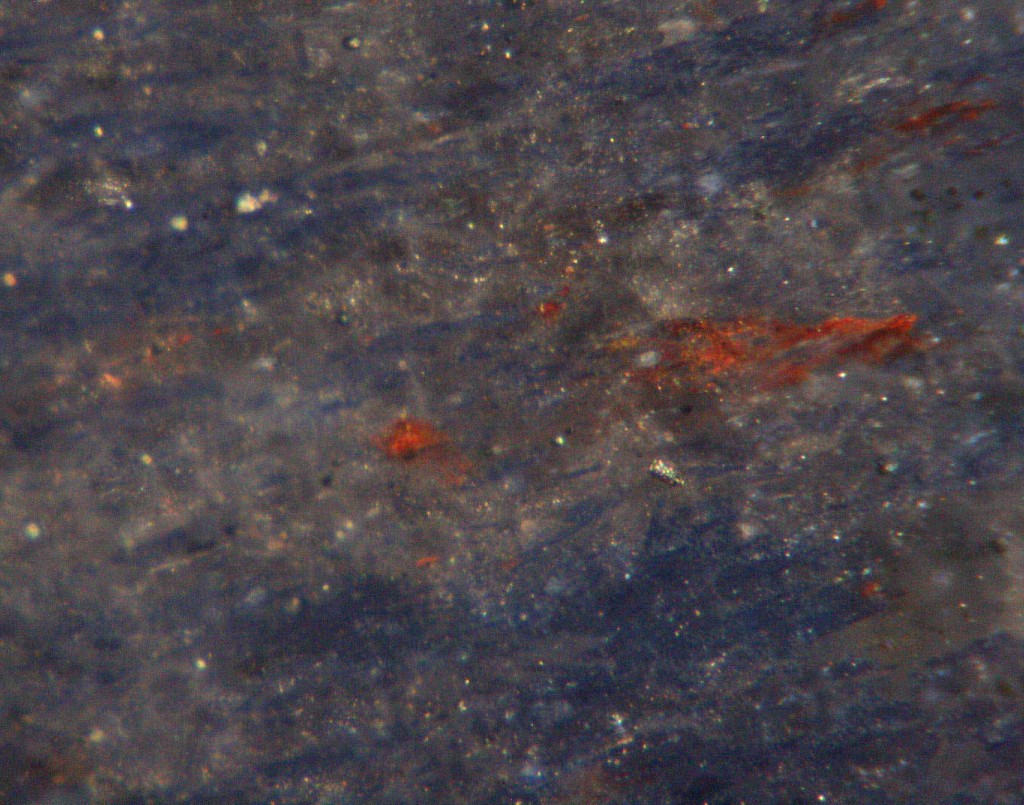 Alternating layers of blue cement and clear quartz can be seen running from the bottom right of the picture to the top left.

← What can I do for the Environment?
Geodes →