Quartz (α and β) Tridymite (α and β) Cristobalite  (α and β) Moganite Coesite Keatite Shistovite. Which one is formed and stable depends on a combination of temperature and pressure. α Quartz, being stable up to 580°C and 2 atmospheres pressure, the commonest form and makes up about 12% of the Earth’s crust

Herkimer diamonds are not diamonds but double terminated quartz crystals. They are found in dolomite rock in large quantities in Herkimer county and in several other sites around the world. 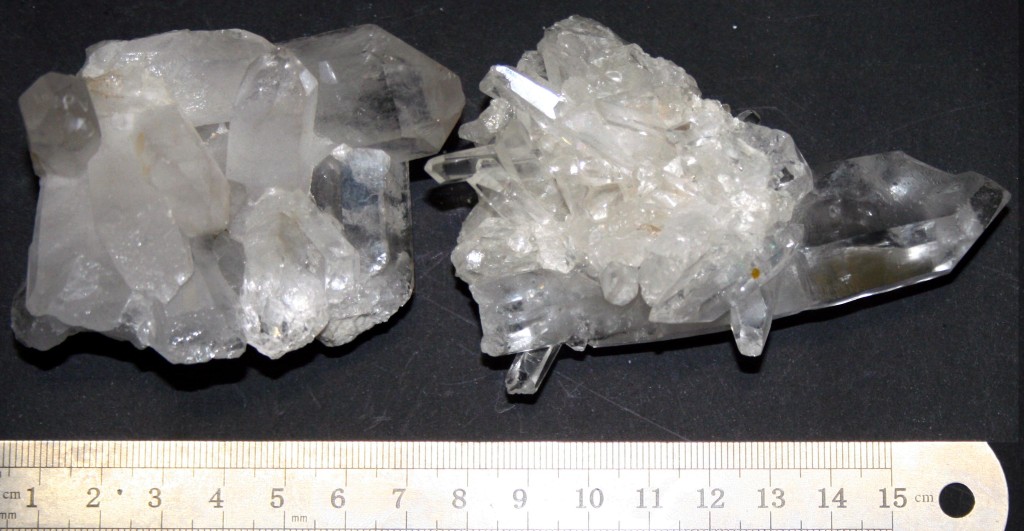 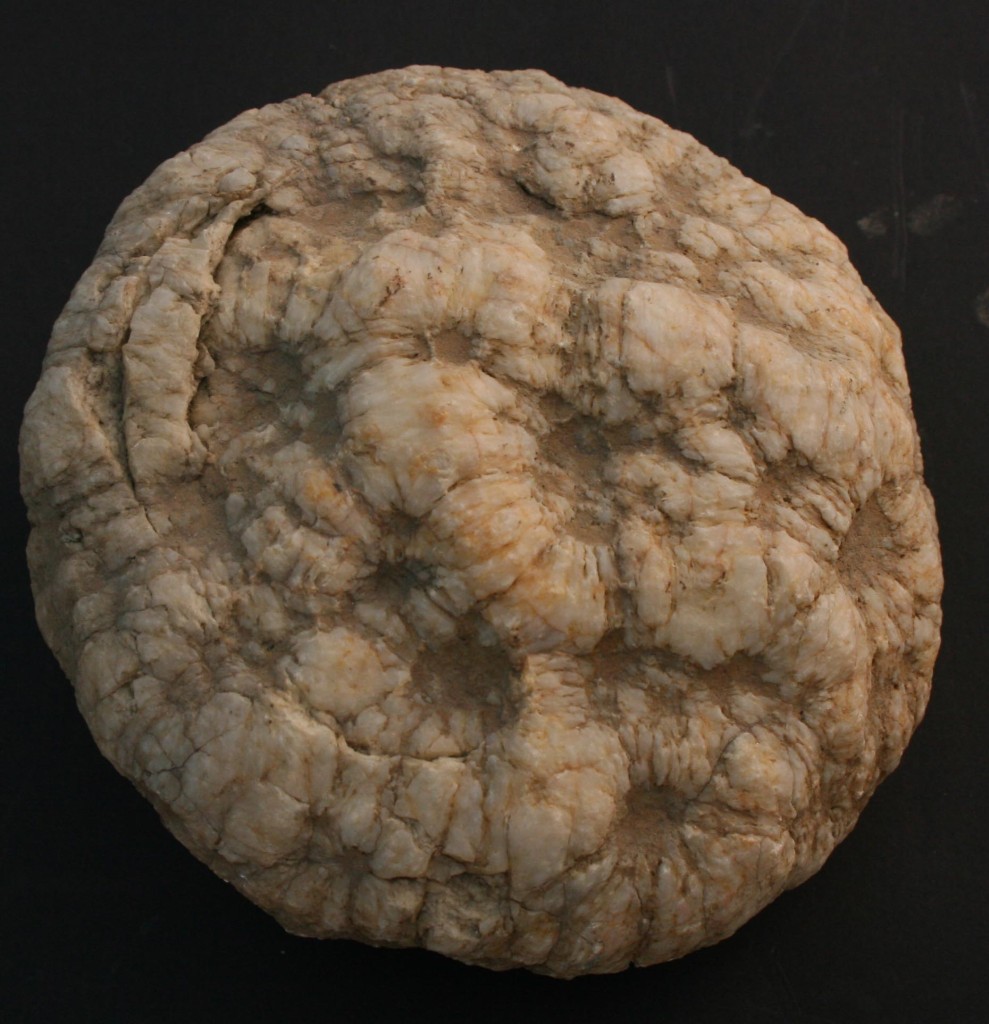 Although the shape of this and similar geodes has a regular reasonable well defined shape, being roughly oval with surface ptis (which tend to be related to the size of the geode) the geode is compose of quartz crstals that have grown in a higgledy-piggledy fashion. 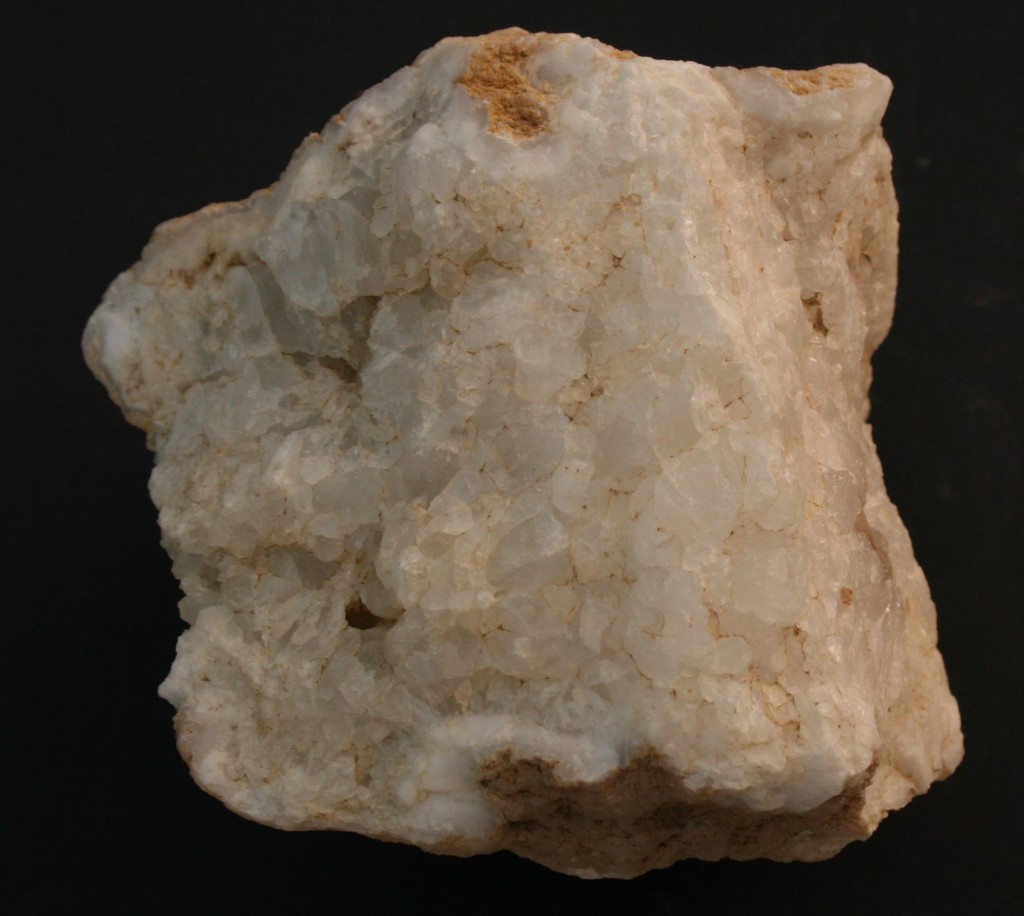 This shows a piece of the inside of one a quartz geode showing the randomly grown quartz crystals.

Like the Calcium carbonate stalactites of limestone caves, the constant dripping and evaporation of silica rich waters can produce quartz stalagmites. Sometimes the growth of the crystal is random and without pattern and sometimes as in the specimen below well oriented into rings. 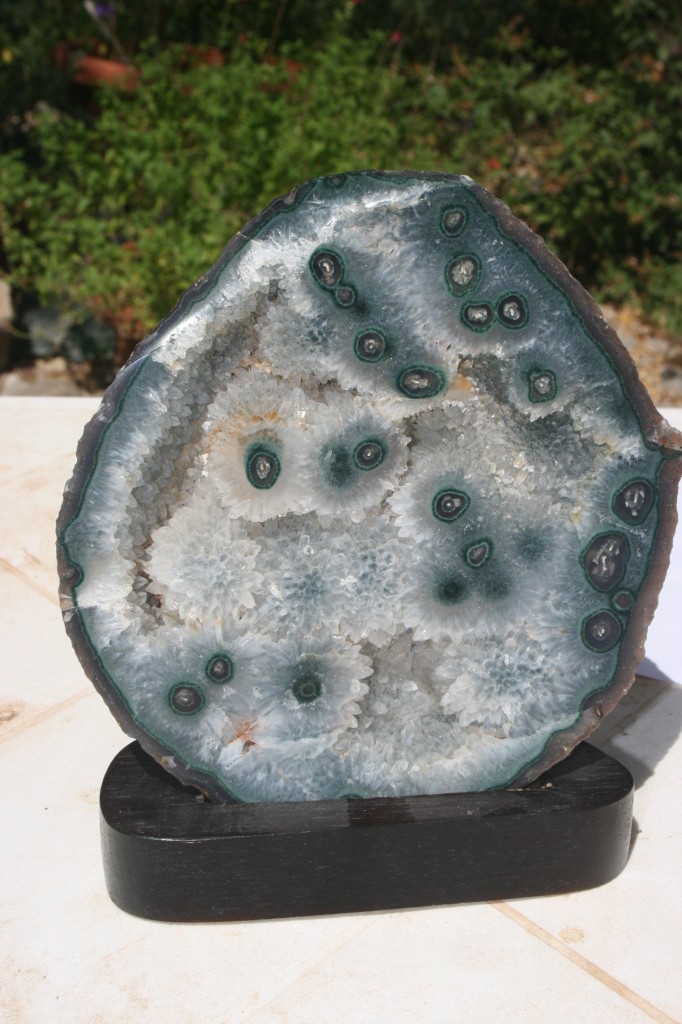 A geode from Uruguay has been cut open and the surface polished. Multiple stalactites can been seen. 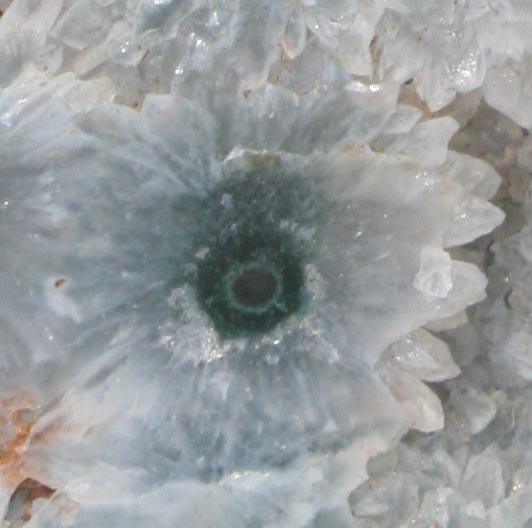 A larger view of one of the stalactites shown in the specimen above. The regular radiation pattern of crystal growth can be seen.

Gwindels are a further example of ordered crystal .The crystal grow in a spiral fashion, one above the other. These are rare, highly prized and highly expensive. 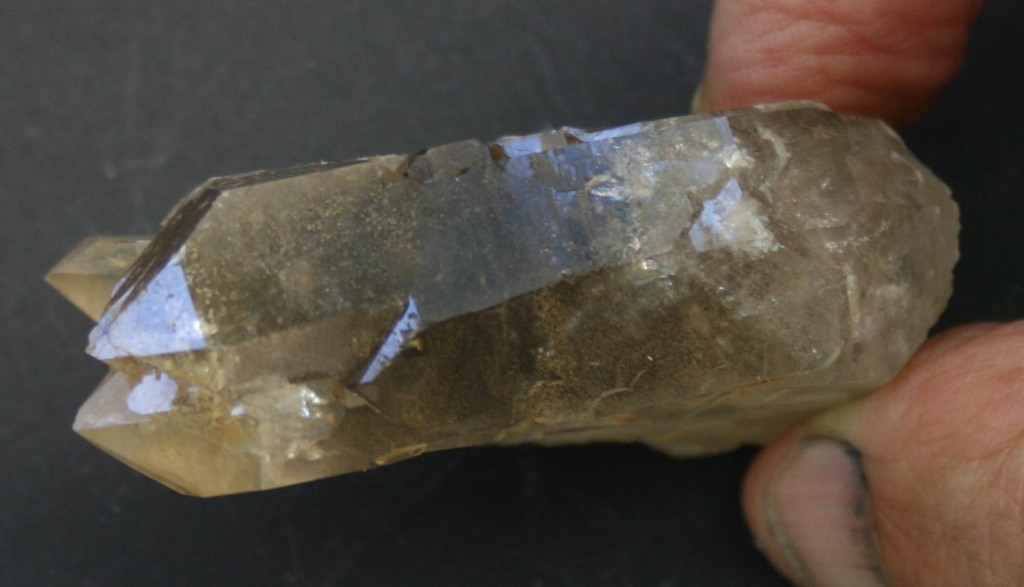 A gwindel seen from the top, a small spiral twist can just be made out. 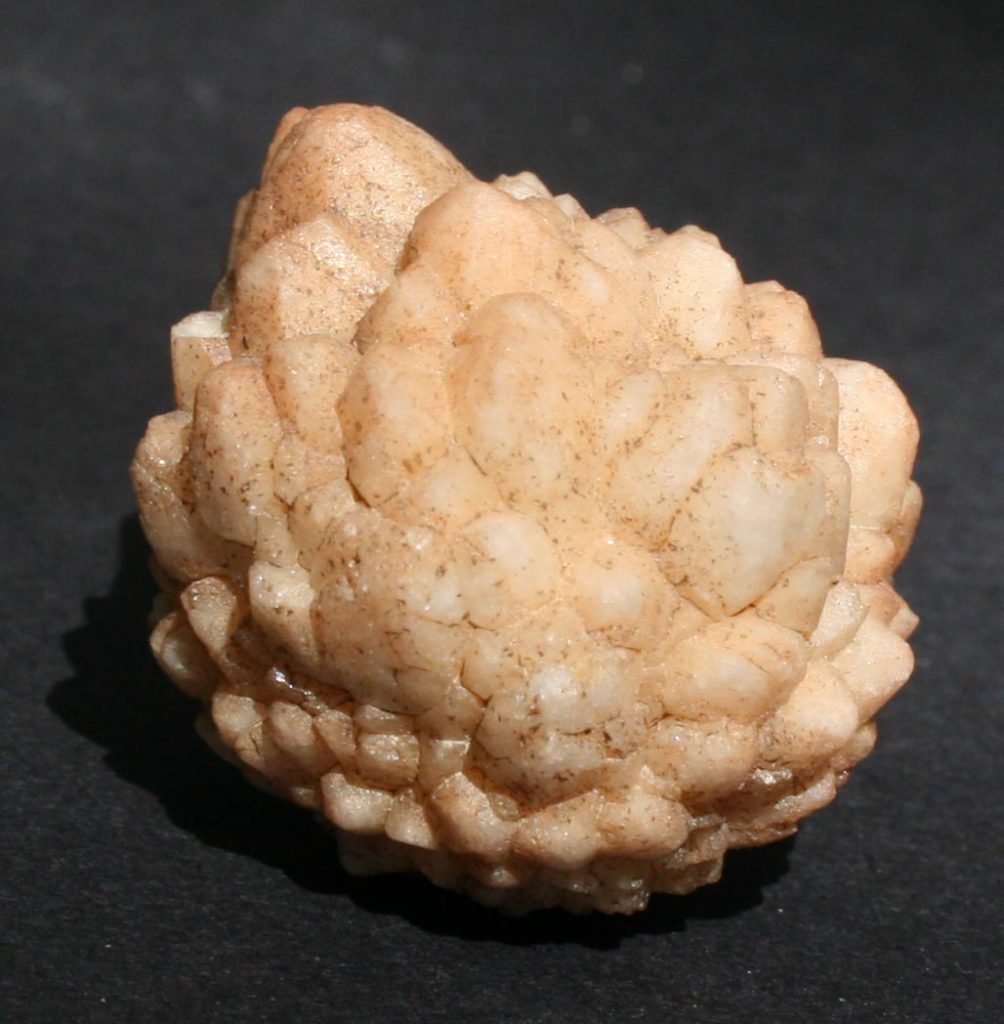 This specimen is known as an artichoke. Again there is some order in the crystal growth. The direction and size of the crystals meshing together to form this exquisite structure.

Quartz crystals often contain “impurities: such as metal ions which give the different colours. 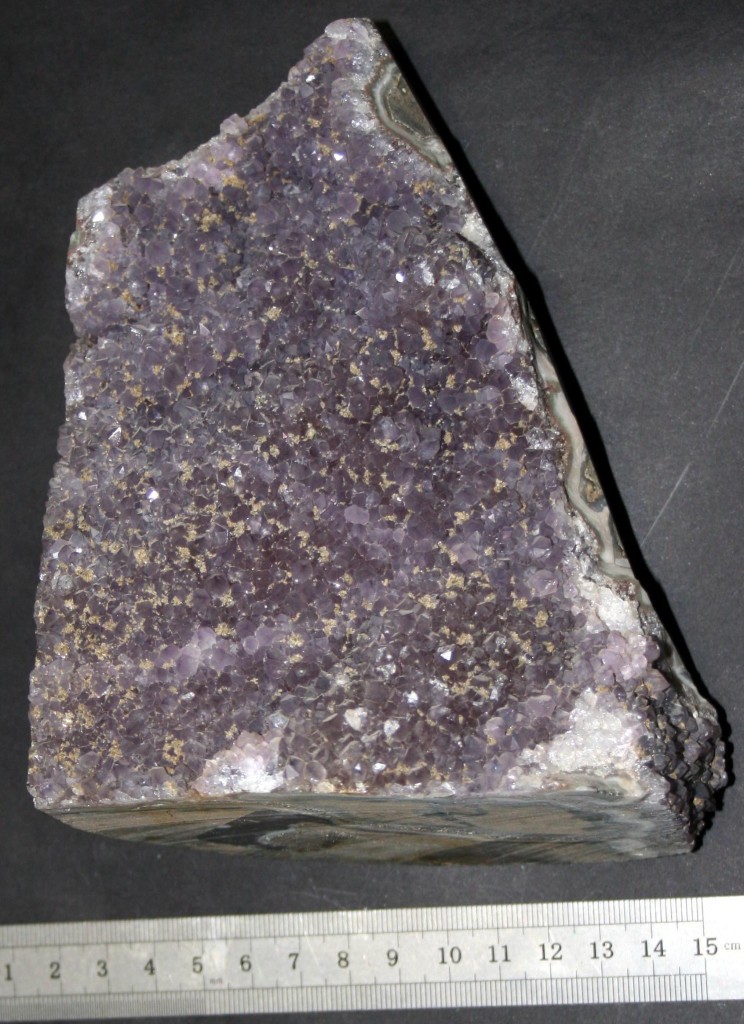 Part of the inside of an Amethyst geode. These almost hollow geodes are lined by purple quartz (irradiates quartz which contains iron ions). There are five precious jewels; diamonds, emeralds, sapphires, rubies and amethysts. At the end of the19th century, huge numbers of large amethyst geodes were discovered in Brazil and today a good quality large amethyst can be bought to $2-$3. Nevertheless, it has retained its “precious” title. 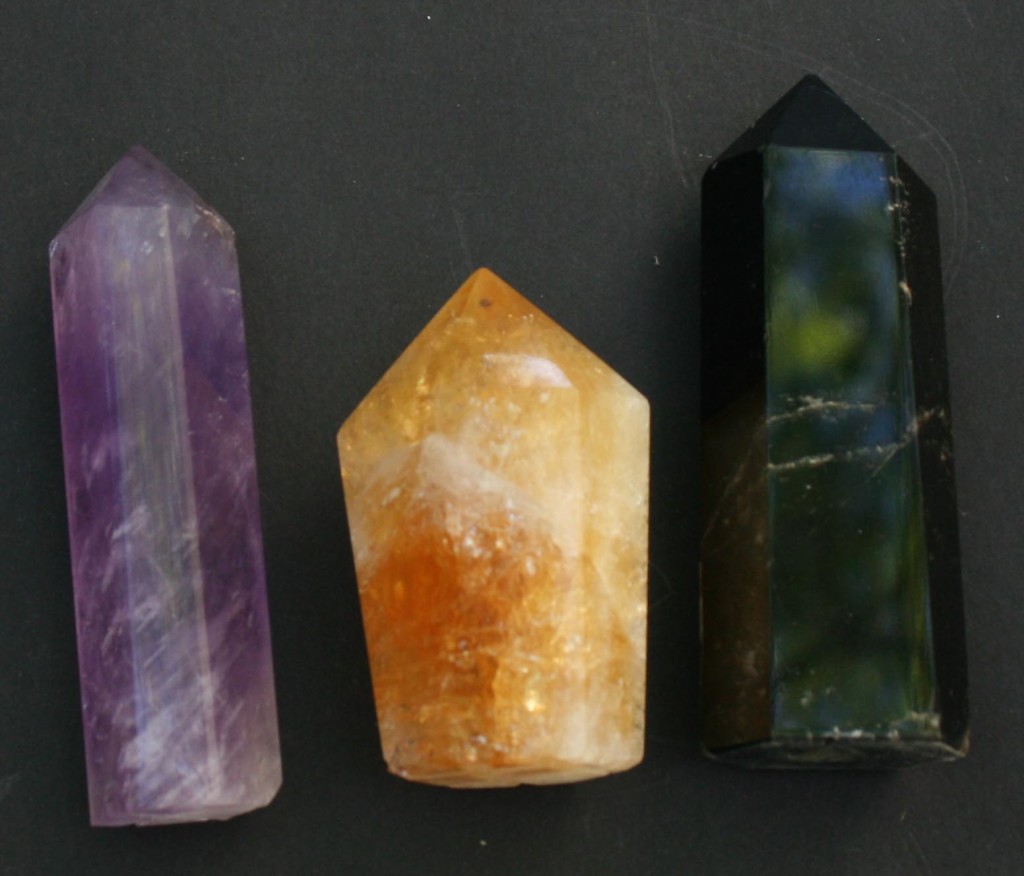 From left to right, amethyst, citrine (amethyst that has undergone natural or artificial heating), smoky quartz (thought to be due to free Silicon atoms produced by radiation breakdown of the Silicon-oxygen bonds).

Red and black coloration of the quartz crystals by haematitie inclusions. 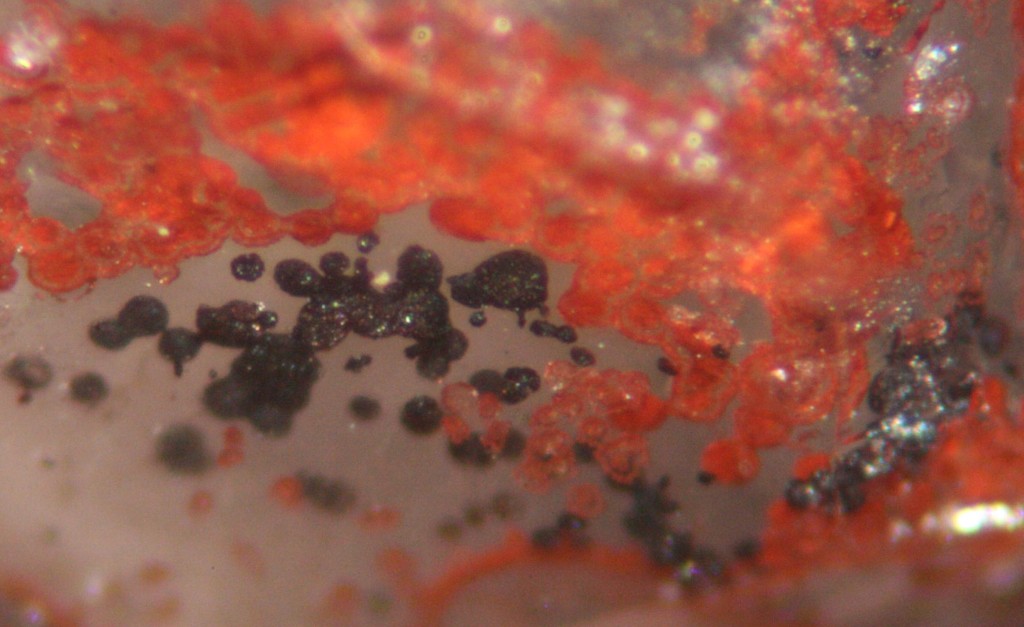 A high power (x20) view of one of the quartz crystals shown in the preceding figure.

Sometimes a quartz crystal containing slightly different amount of water of other impurities can be ssen within a larger crystal. These are known as phantoms. 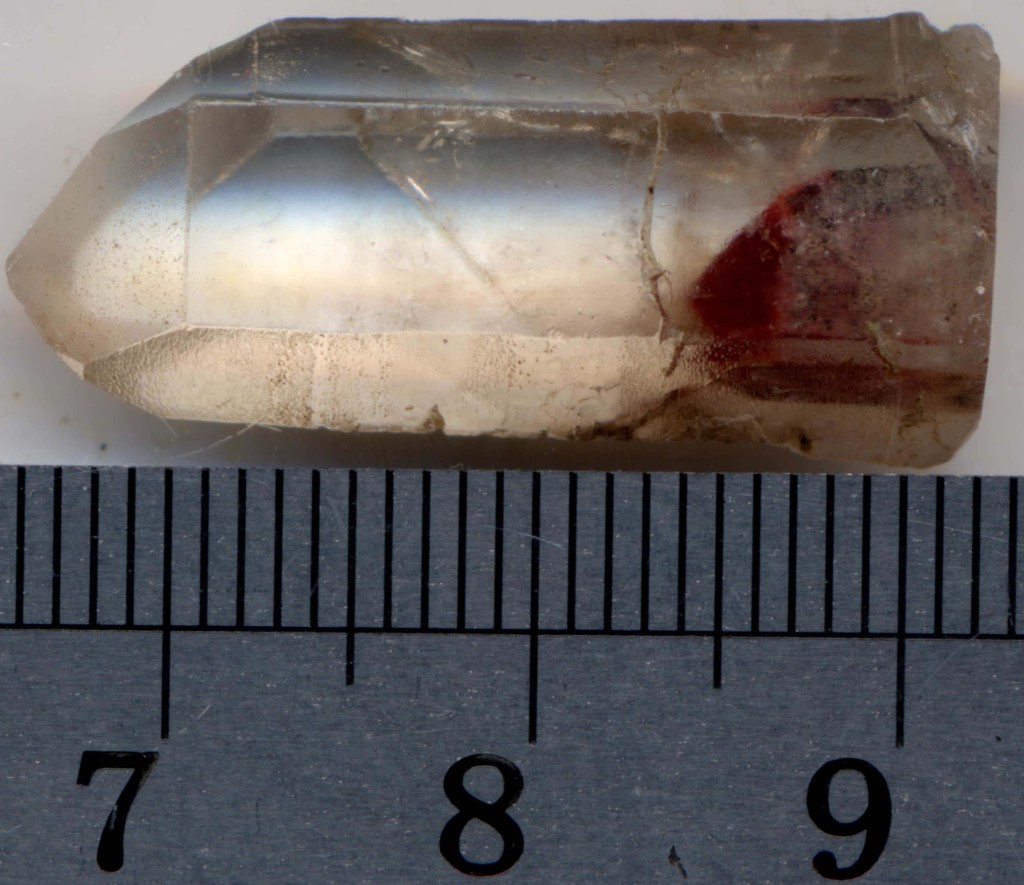 Occasionally there is a hollow within the crystal, which while it was forming at a higher temperature, contained hot water. At room temperature this cools and contracts leaving a bubble of vapour within the liquid. On tipping the crystal this bubble moves up and down in the liquid. These crystals are known as Enhydros. 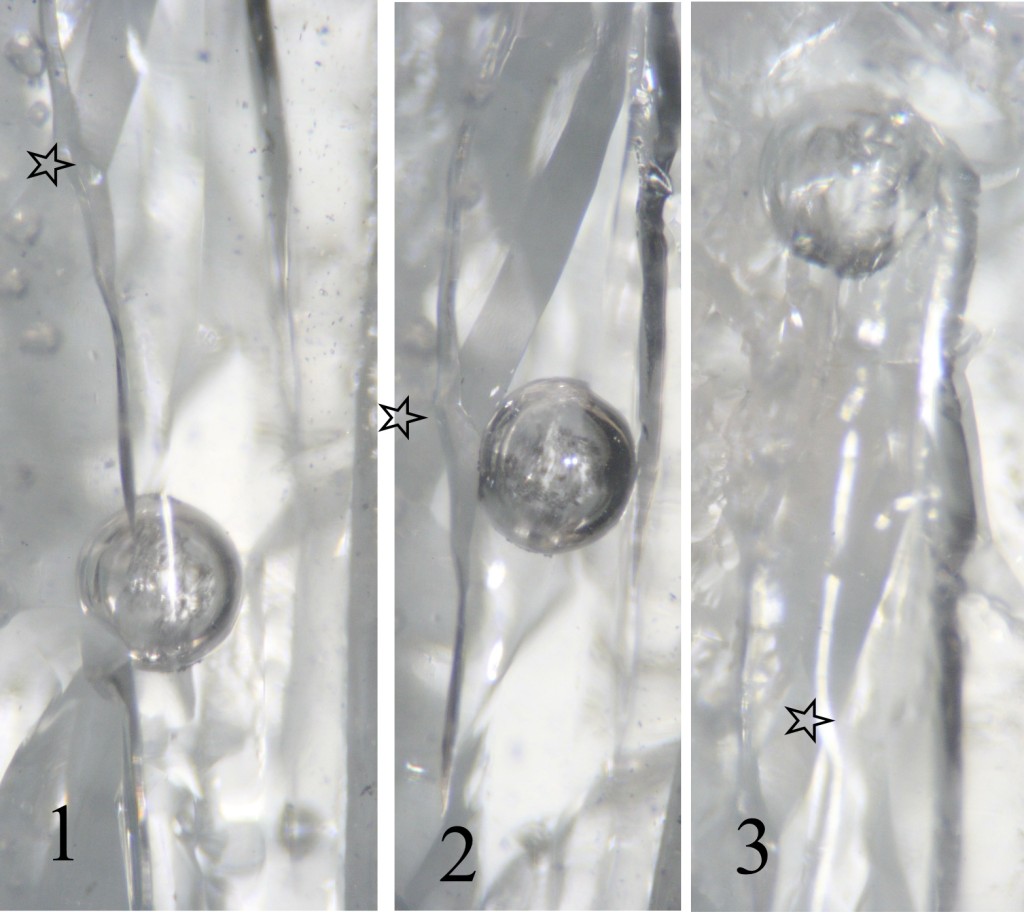 Three views of the same enhydro. The hollow star marks the same area of the crystal and the bubble can been seen moving upwards from left to right (1 to 3).

Other Polymorphs of Silica 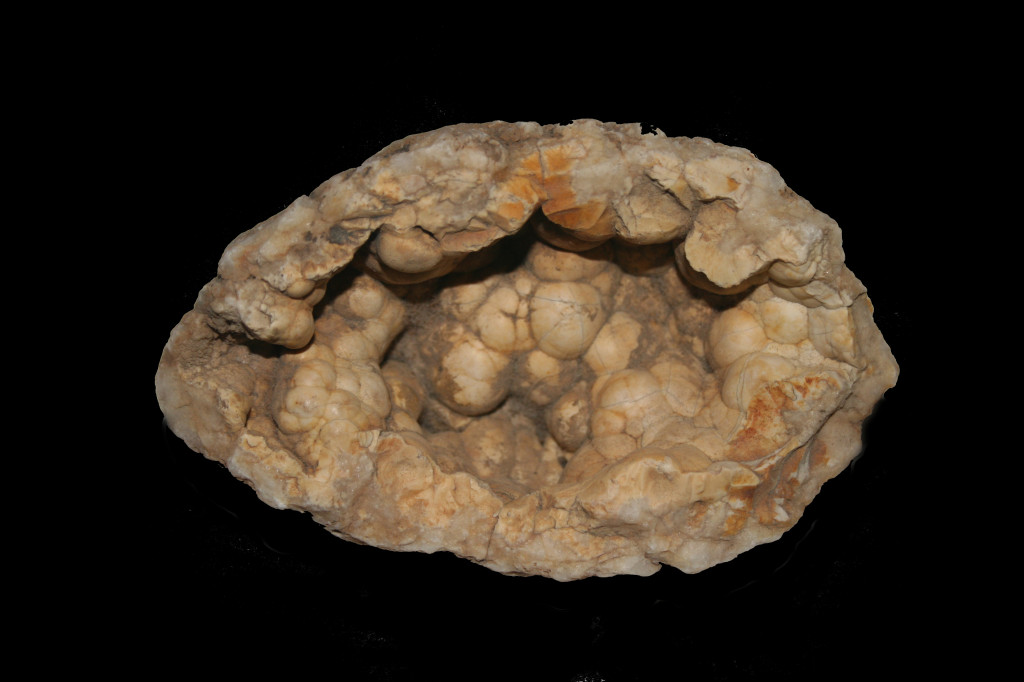 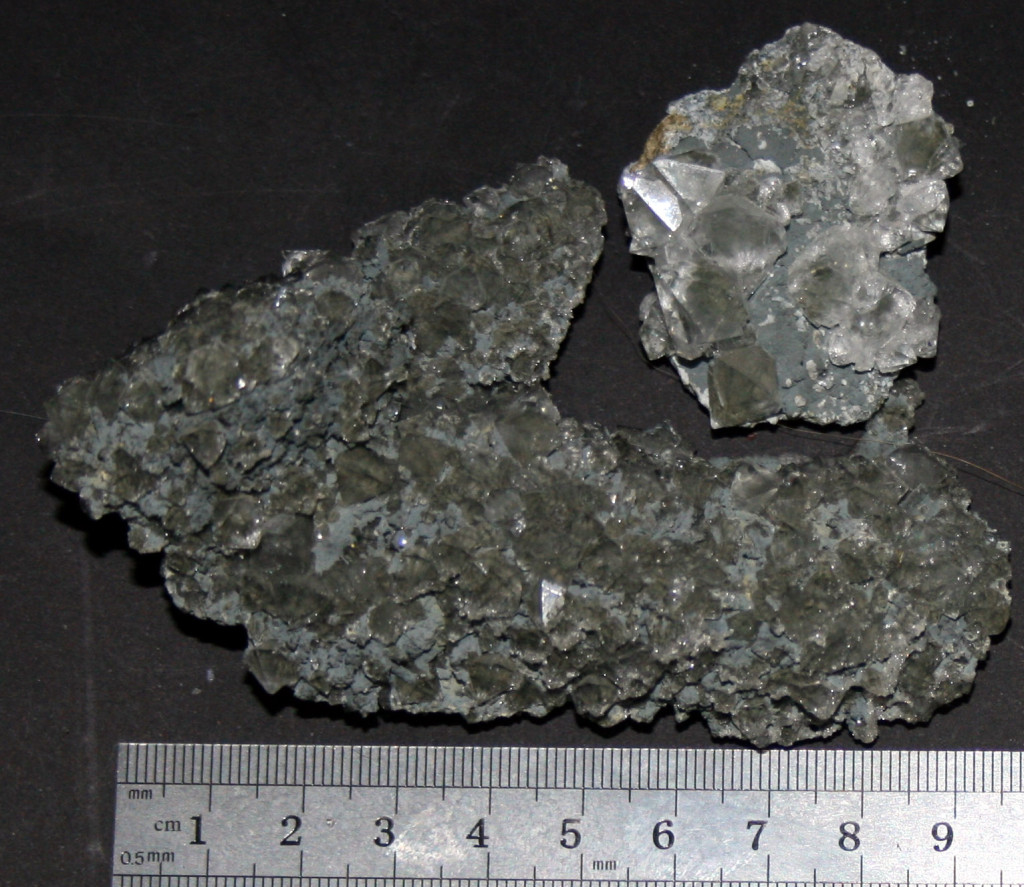 β Quartz. This is formed at higher temperature and pressure. It shows 6 fold rotational symmetry rather than the 3-fold found in α quartz. 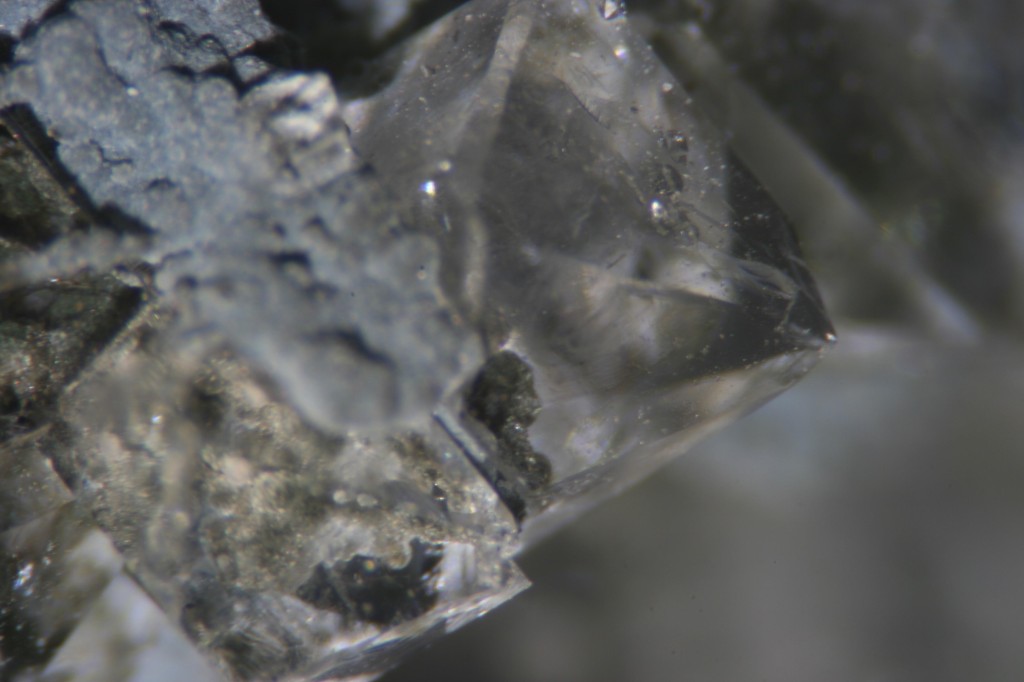 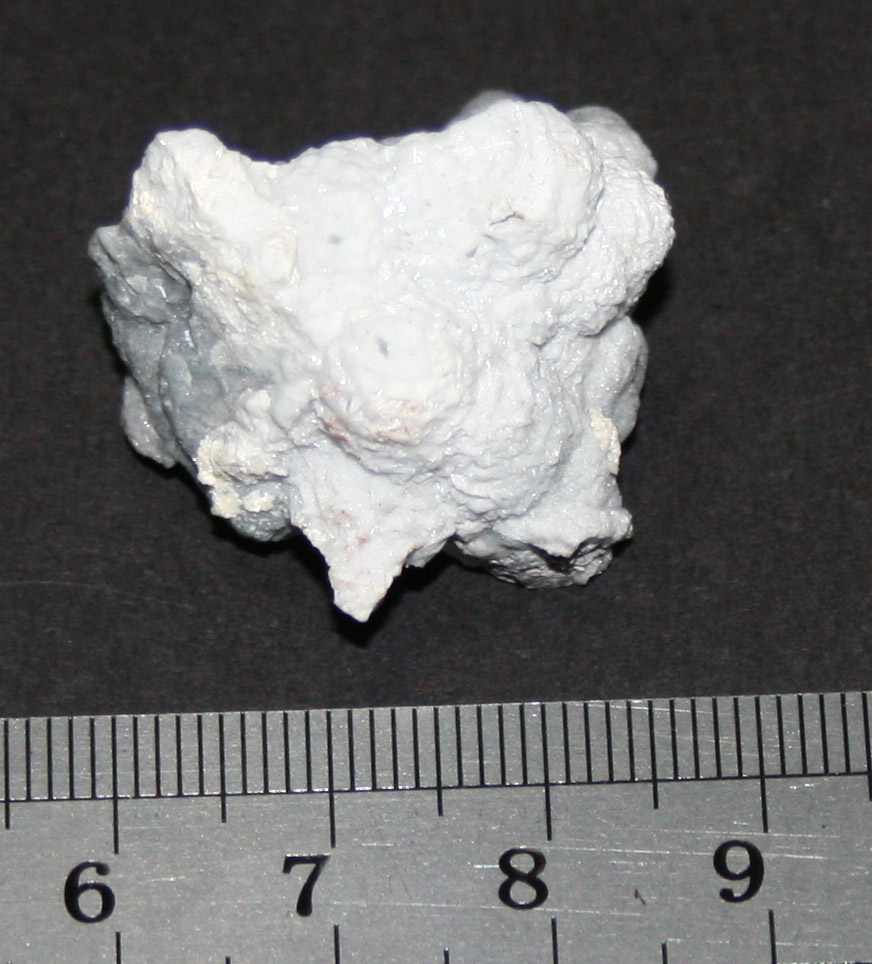 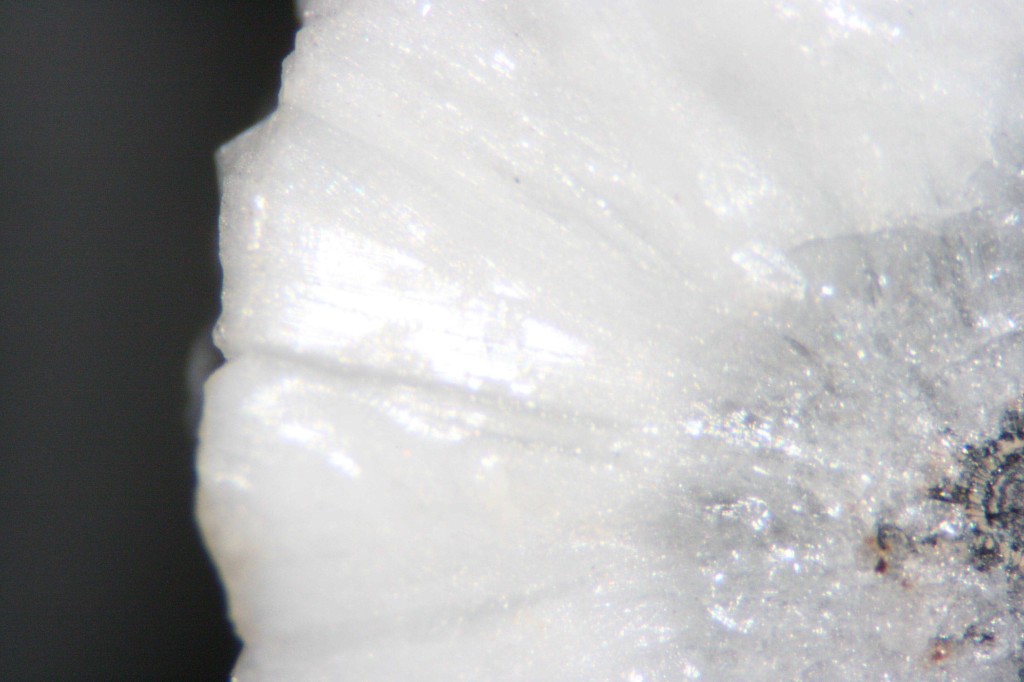 Tridymite seen under the microscope (x40) 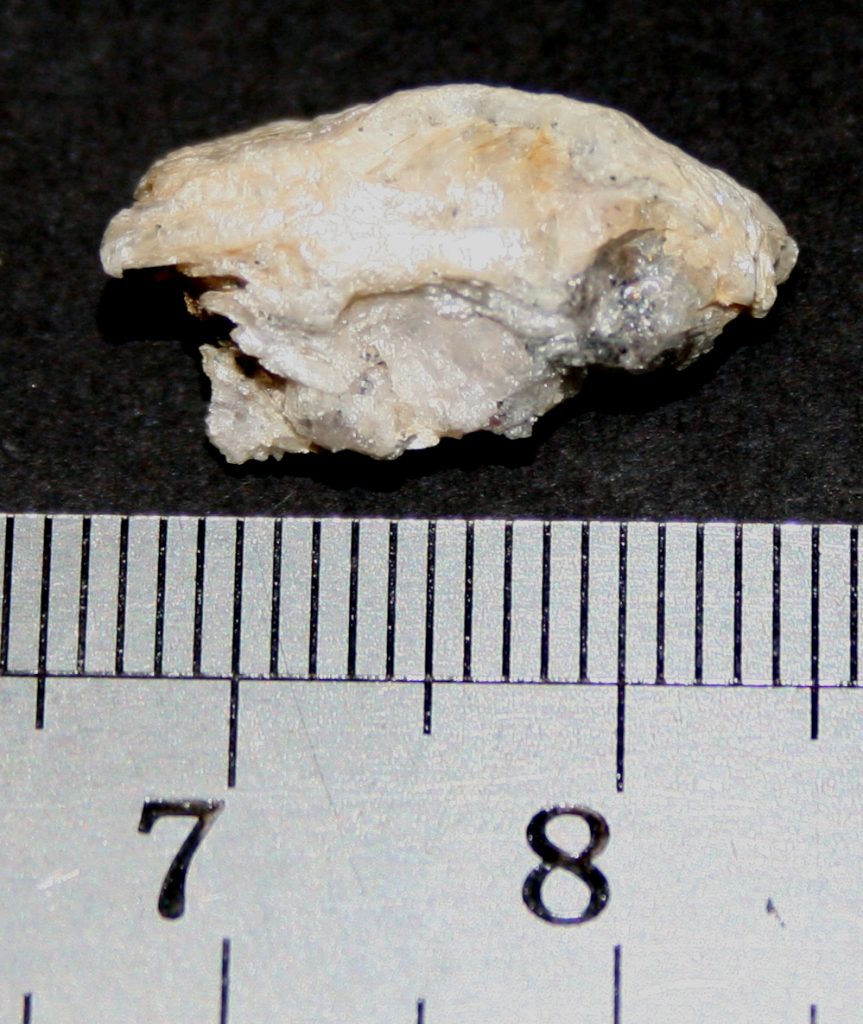 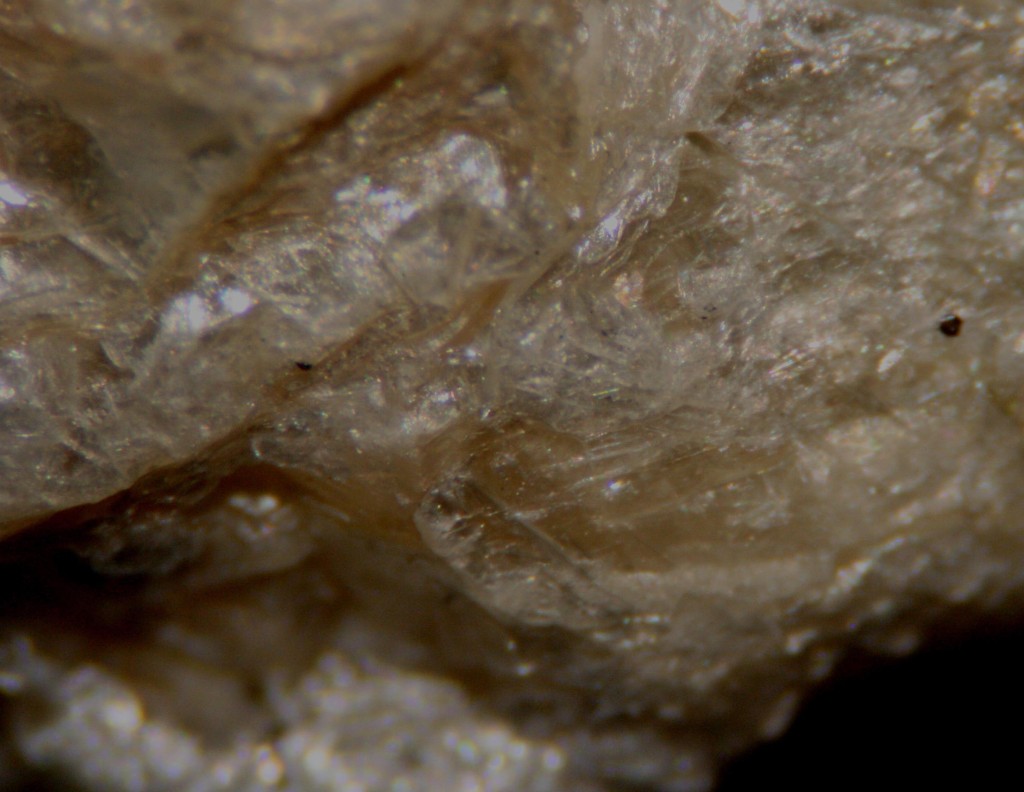 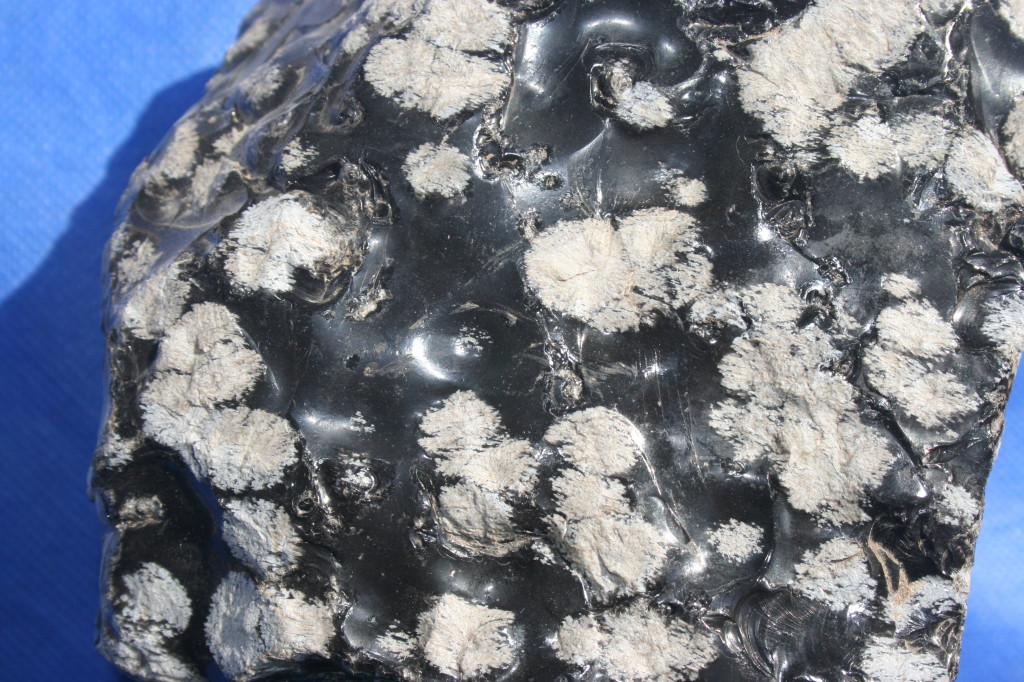 Cristobalite – This is formed at high temperatures (1500°C-1700°C) and low pressure. It is often found in associatin with obsidian (as Snowflake Obsidian). When the hot volcanic glass cools, if sufficiently slowly.  Areas of cristobalite will form.